Syria’s story is one that has been weaved through families from one millennium to the next. Subjugated as a Roman province under the command of Pompey the Great [1] in 64 BC, and brought under Ottoman rule 16 centuries later by Sultan Selim I[2] in 1516, the country has experienced its share of the world’s great military conquests. The empires that vied to establish dominance over the region left behind varied architectural and cultural legacies that were subsumed into the nation’s heritage. For Syrians, the experience of savoring the spices at the Souqs in Aleppo [3]or admiring the gem that is the Roman theatre in Bosra [4] are birthrights.

Syria’s historic sites have long attested to its riveting history. But their pulverization over the course of a six-year civil war that has claimed well over 400,000 [5] lives and displaced more than half the country’s population means future Syrians, and the world at large, risk being deprived of this long-standing narrative.

The Ancient City of Aleppo, inscribed on UNESCO [6]‘s World Heritage Site list in 1986, has historically served as a vibrant trading centre where commercial roads from East and West met, located strategically between the Mediterranean Sea and Mesopotamia. Its prominence in history is attributed to its location at one end of the Silk Road [7].

One of the world’s oldest continually inhabited cities, it has experienced some of the most horrid atrocities of the war.

Towards the fall [8] of the then-besieged Eastern part of the city in December at the hands of the Assad regime and its proxies, local activists expressed their struggle to count daily death tolls [9].

According to the United Nations Institute for Training and Research (UNITAR [10]), a total of 22 heritage locations in the city were destroyed and 48 severely damaged as of 2013.

In the busy bustle of Al-Madina Souq, one would typically find a colourful array of imported goods, ranging from silk to spices, and local goods including soap and wool. Apart from trading, the souq also was home to Khans (caravanserais), which accommodated traders along with their goods. 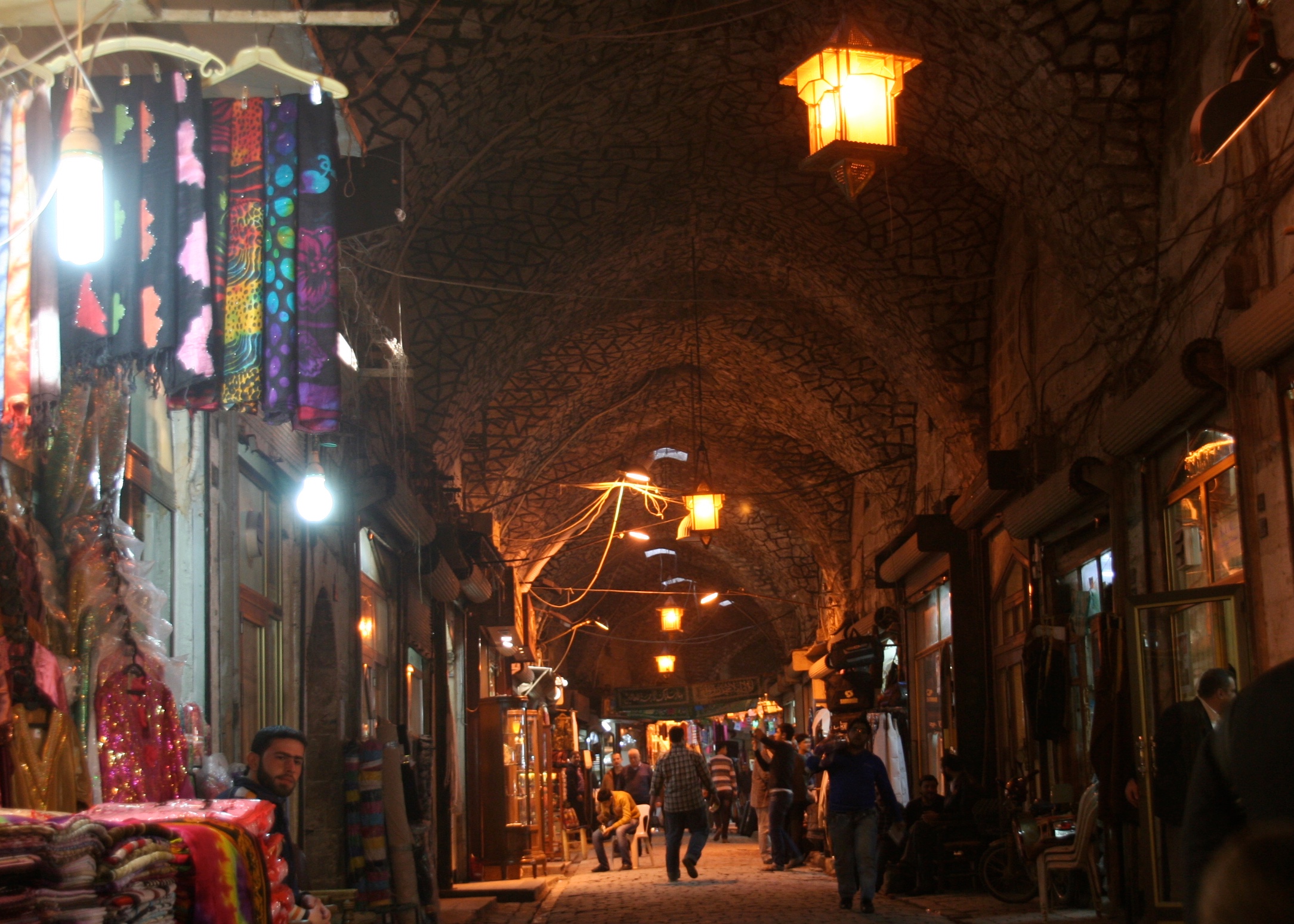 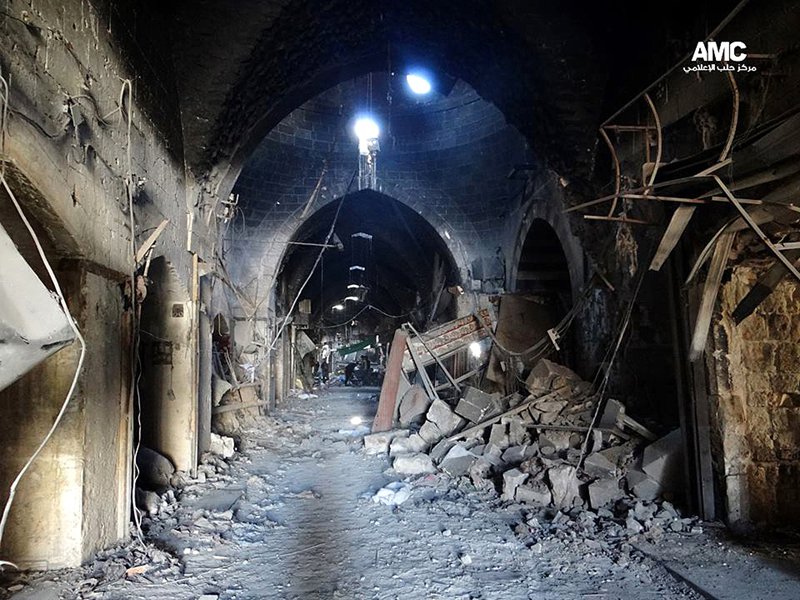 In late 2012, intense fighting took place between the regime and the Free Syrian Army (FSA) in and around the Souq. The regime attacked [13] the historic site using mortars, leaving it ablaze.

While UNITAR’s assessment of the damages found that most of the shops have been completely destroyed, one hopeful Aleppine expressed to The Telegraph [13] newspaper in 2012:

It is very bad and very sad..But we can rebuild it, after the revolution is over.

The Citadel of Aleppo 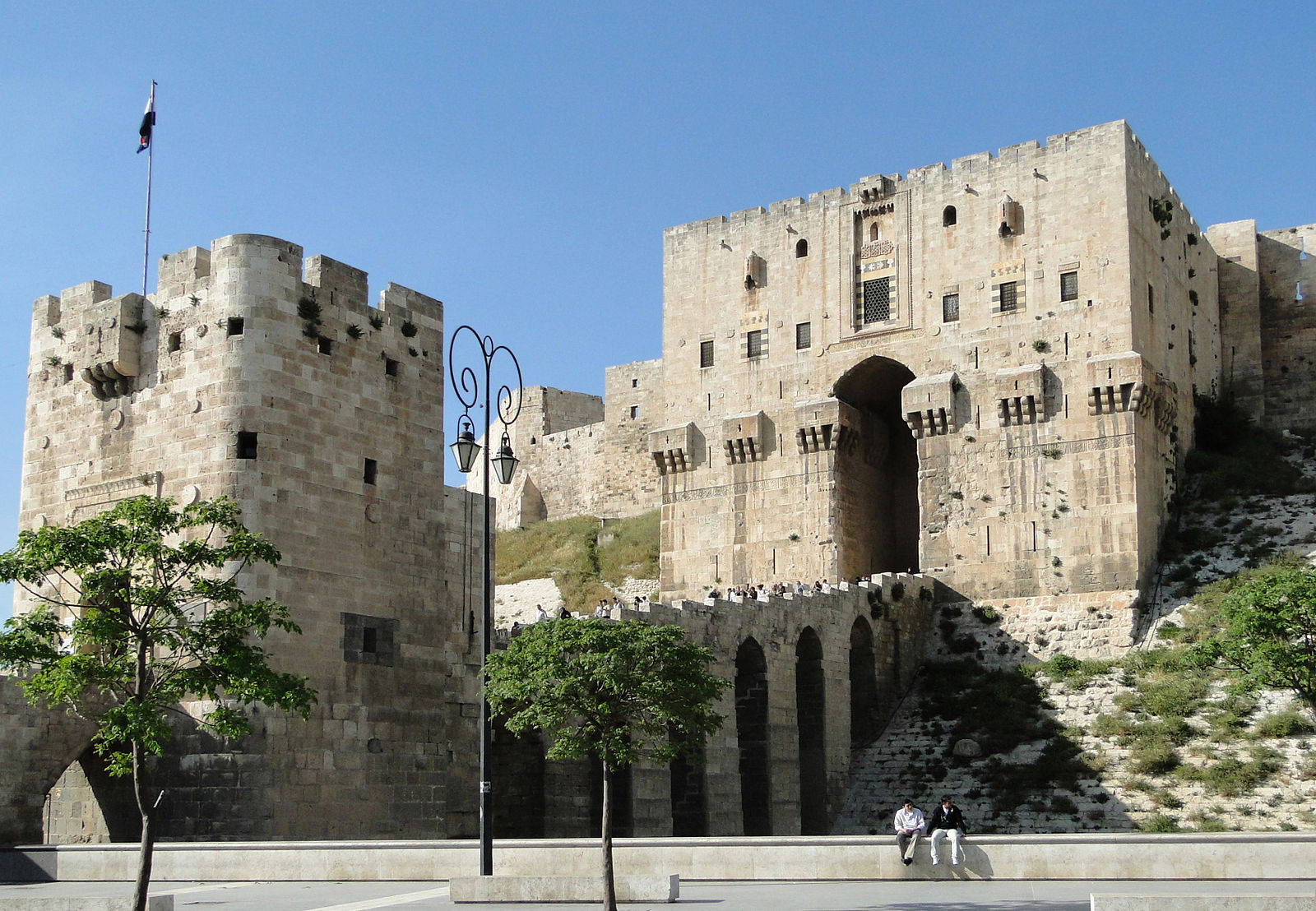 The Citadel of Aleppo is a fortified medieval castle located in the heart of the old city and considered to be one of the world’s largest and oldest of its kind. The limestone monument had fallen under the control of Byzantines, Greeks, Ayyubids, Ottomans, and others, and each of its various conquerors left their own mark on it architecturally.

The citadel was shelled continually [15] by the Assad regime from 2012 and a bomb explosion [16] in July 2015 caused part of its walls to collapse.

The Syrian regime and rebel groups exchanged blame for the explosion. 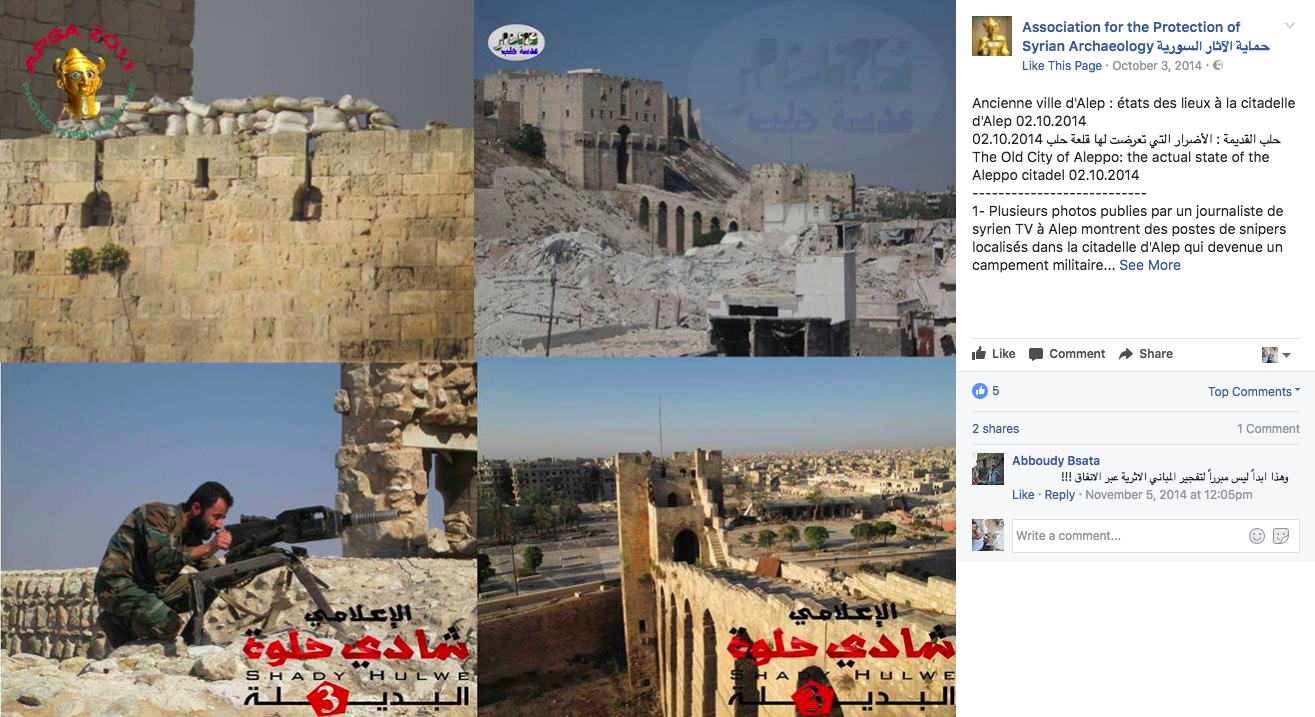 Screenshot from the Association for the Protection of Syrian Archaeology dated to October 3, 2014. The photo was accompanied with the following caption: Several photographs published by a photographer of Syrian TV in Aleppo show sniper positions inside the Aleppo citadel, which has become a military camp of the Assad regime’s army. This positioning of snipers puts the monument in danger from rebel fire. The photographs reveal that one of the citadel’s towers is damaged and has cracks. Several facades and architectural components of the citadel such as towers have sustained damage. Source: Facebook. [17]

The 15th-century Aleppine historian Ibn al-Shihna [18] wrote: “The Great Mosque of Aleppo rivaled that of Damascus in its decoration, painting, and mosaic.”

The Great Mosque of Aleppo, otherwise known as the Umayyad Mosque, had its spectacular minaret built in 1090 and which lasted nearly 1,000 years — it was destroyed in 2013. A closer look at the mosque’s magnificent courtyard in 2009. Photo by Arian Zwegers via Flickr [19]. CC BY 2.0

The Umayyad mosque shares many characteristics with its sister mosque in Damascus, ranging from the marble courtyard to the location on a Roman/Byzantine site.

The Syrian regime, backed by its Russian and Iranian allies, persistently targeted the mosque in the battle for control of the city that raged following its capture by rebel forces in 2012.

#Syria [20]: Umayyad Mosque of #Aleppo [21] is one of the oldest mosques in the city, dating back to the 8th century, destroyed during clashes. pic.twitter.com/hjdd9J9APd [22]

One witness, a rebel fighter, recalled:

We were standing here today and suddenly shells started hitting the minaret. [The army [24]] then tried to storm the mosque but we pushed them back.

According to UNITAR’s assessment, the mosque has sustained severe damage to its eastern outer wall, the southern part of the eastern gallery, the marble-tiled courtyard, the garden, and the entrance to the souq from the eastern gallery.

Helga Seeden [25], a professor of archaeology at the American University of Beirut, told The Associated Press:

This is like blowing up the Taj Mahal or destroying the Acropolis in Athens. This mosque is a living sanctuary. This is a disaster. In terms of heritage, this is the worst I’ve seen in Syria. I’m horrified. 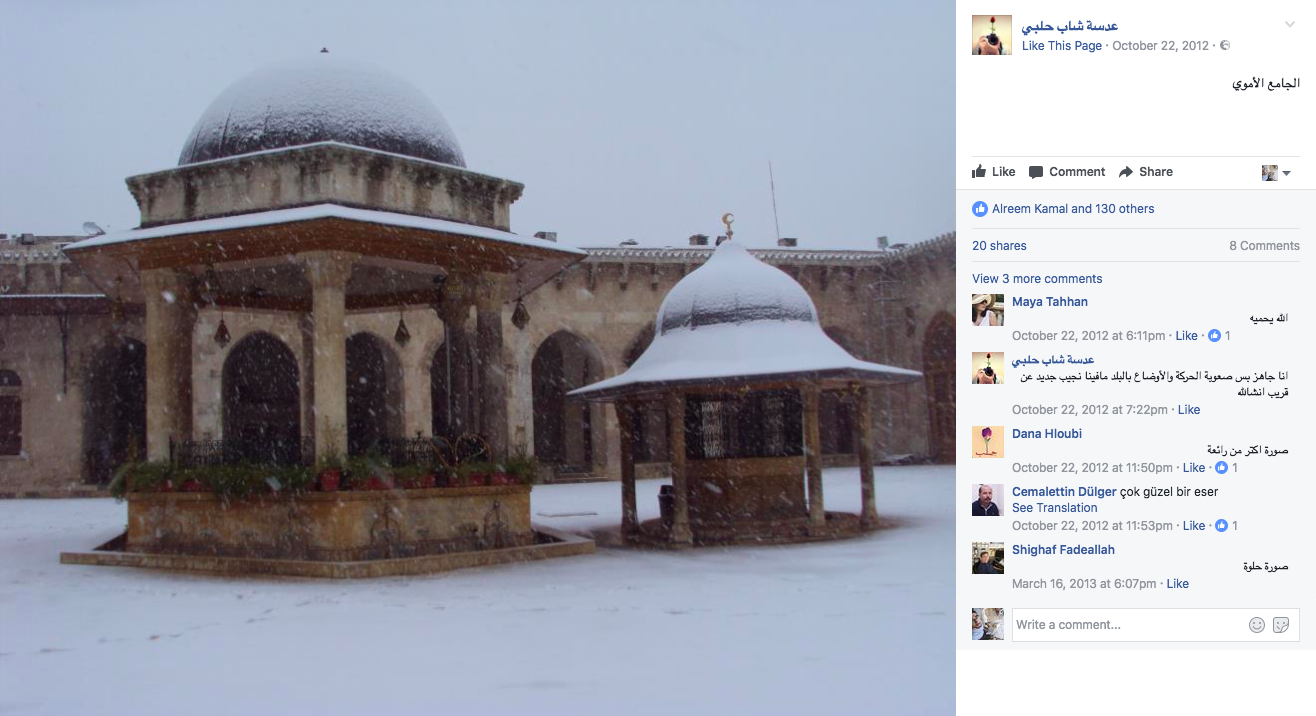 Screenshot of a photo of the Mosque by a citizen photojournalist who went by the name of ‘Lens of a Young Aleppine’ dated to October 22, 2012. Source: Facebook. [26]

Deemed a symbol of the revolution, the Daraa mosque was built in the 7th century by the Islamic Caliph Omar ibn al-Khattab. Its once marvelous minaret, now destroyed, was the first minaret in all of the Levant.

The historic mosque had been the focus of anti-regime [27] demonstrations in Daraa and hosted a great number of protests that were consistently met with brutality from government security forces.

It was primarily for this reason that the regime persistently shelled the mosque, destroying its minaret, in an attempt to crush the spirits of protestors. 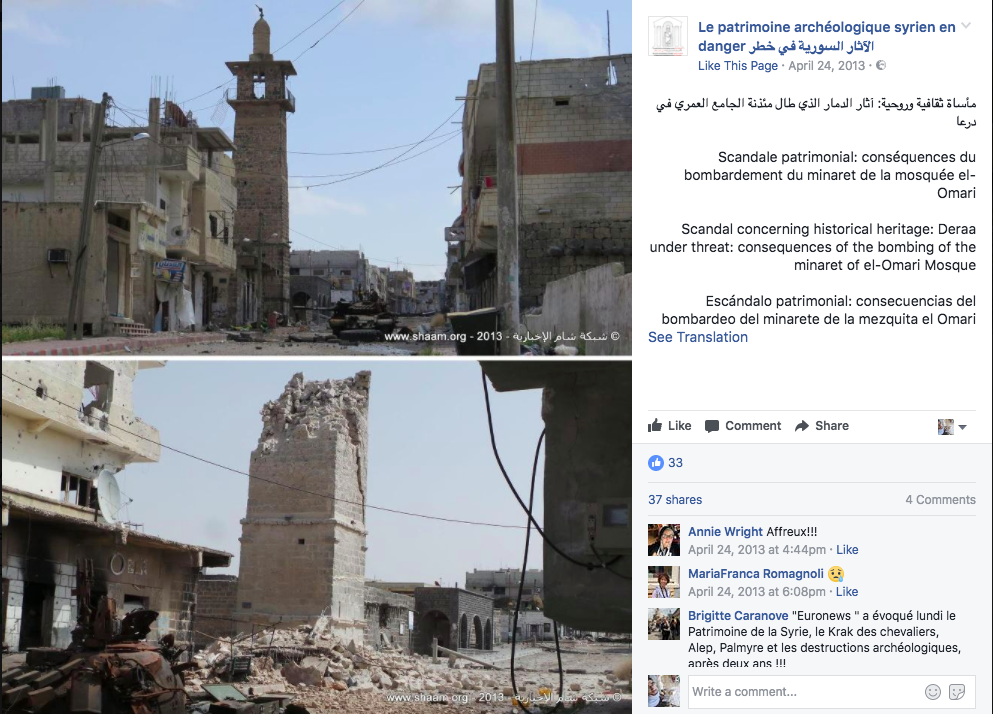 In the vicinity of this historically rich southern city lies a grandiose 2nd-century Roman theatre, some of the oldest surviving Islamic mosques and Christian ruins, too. The Ancient City of Bosra, inscribed as a UNESCO World Heritage Site in 1980 and added to UNESCO’s list of World Heritage in Danger [30] in 2013, was once the capital of the Roman province of Arabia and a stop-over for caravans en route to Mecca. 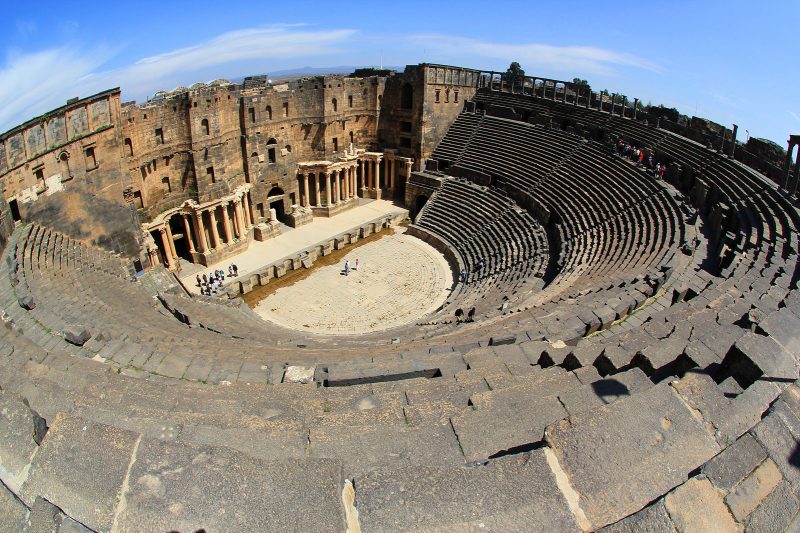 This site of immense cultural importance was bombed by regime [32] helicopters in 2015, causing severe damage to the ancient citadel. 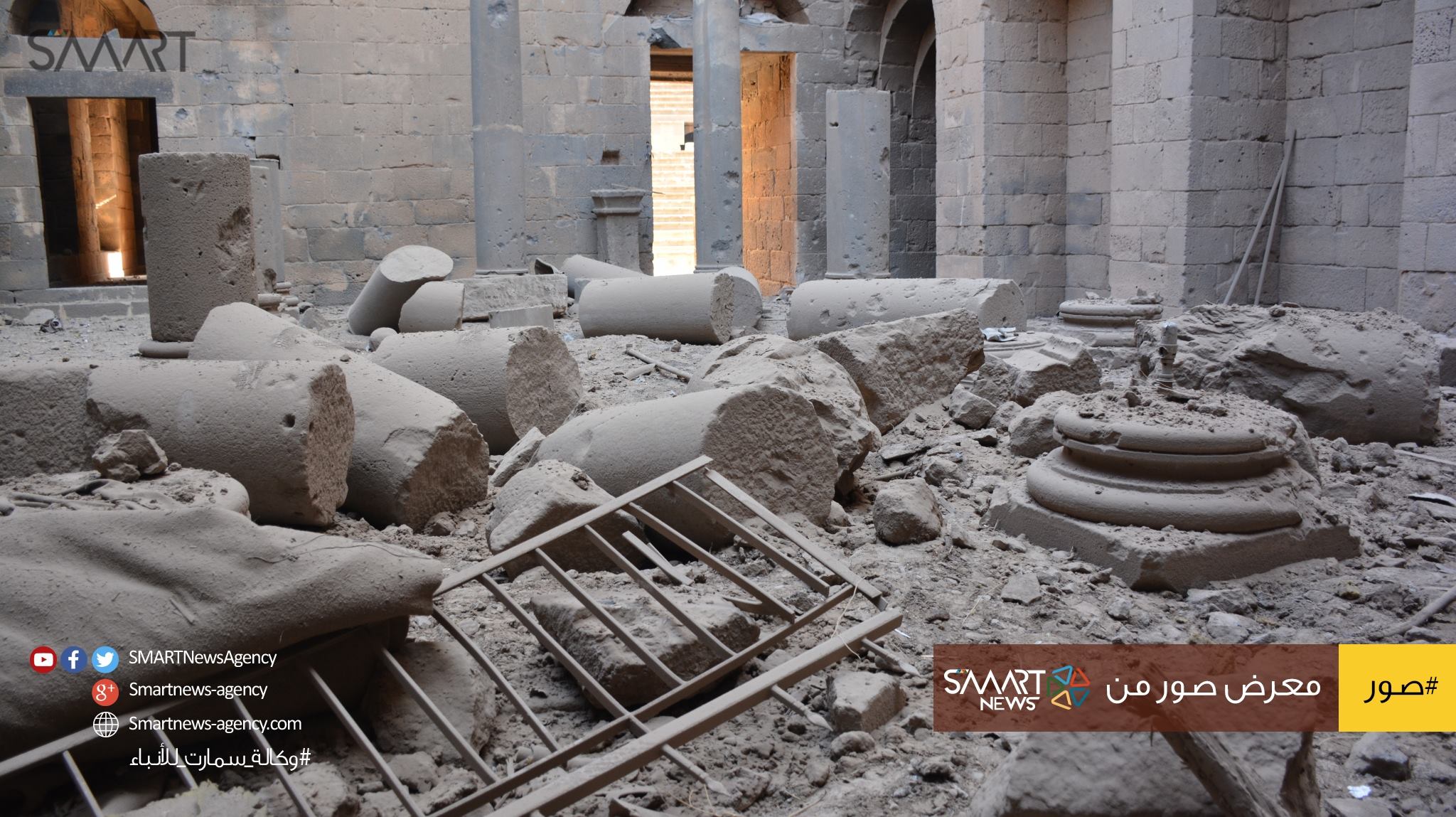 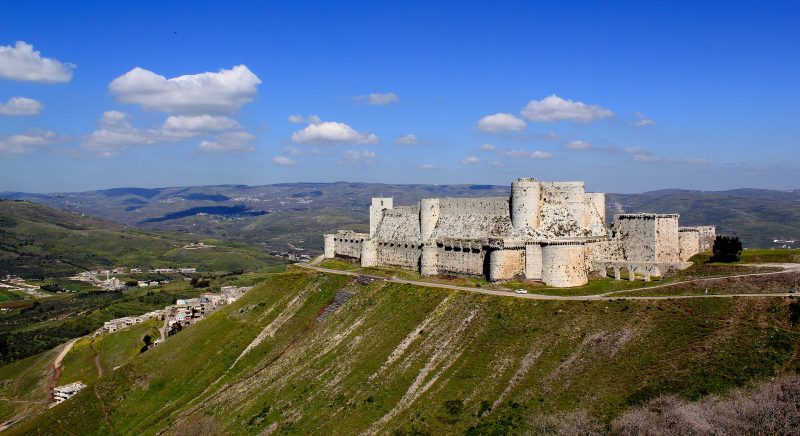 The medieval castle overlooking the surrounding scenery [34]. Photo by (Ergo), cropped version by Nev1, via Wikimedia. CC BY 2.0

Crac des Chevaliers, meaning ‘Castle of the Knights’, is a Crusader castle in the Homs Province of Syria. Another UNESCO World Heritage site, it is regarded as one of the most important preserved medieval castles in the world. The fortified castle was built by the Hospitaller Order of Saint John of Jerusalem from 1142 to 1271 and received further construction by the Mamluks in the late 13th century [35].

The castle has endured significant damage, especially to the Crusader chapel, due to a series of shellings and airstrikes [36] by the Syrian regime. 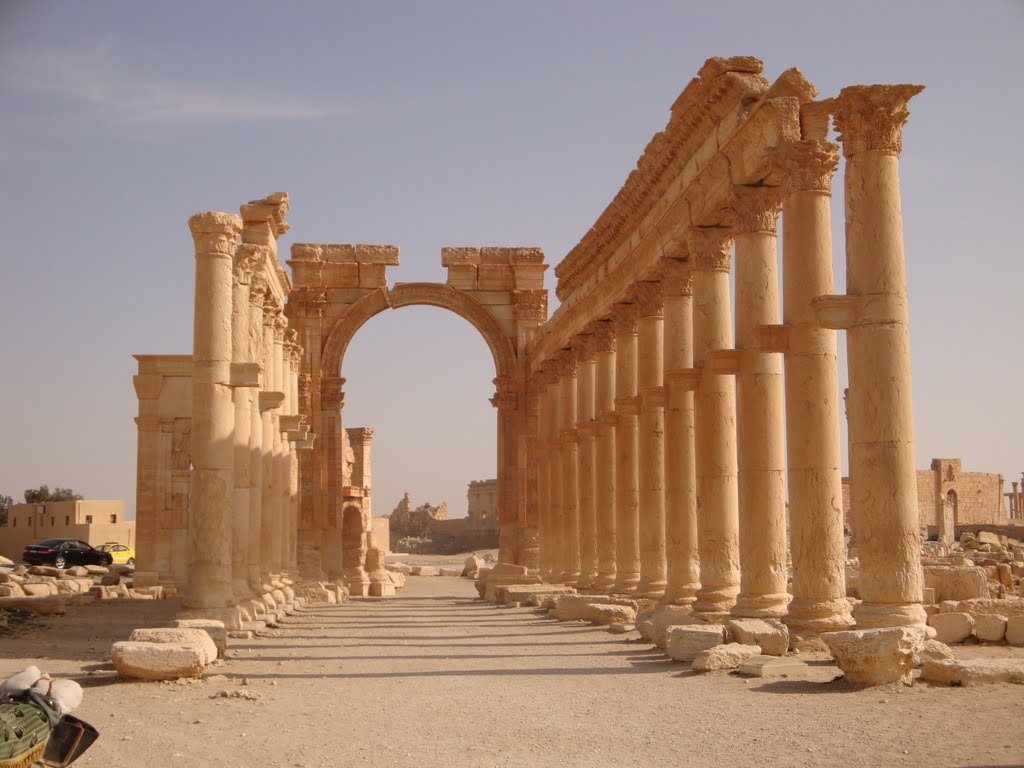 The 2,000-year-old Arch of Triumph in Palmyra before its destruction by ISIS. Source: Pixabay. [37] Public domain.

The ancient semitic city of Palmyra grew wealthy during the Roman Empire on account of its prominent merchants that operated along the Silk Road. This wealth facilitated the construction of exquisite monuments that include the Temple of Bel, Tower of Elahbel, and the Arch of Triumph. Unfortunately, all three of these monuments have endured severe damage and even destruction.

Since capturing the city in 2015, ISIS [38] has blown up a great number of its temples and other monuments.

Once a city that captured the heart of every historian and archeologist, Palmyra now evokes a sense of mourning for a rich heritage cast aside. The Khalid ibn al-Walid Mosque in Homs is named after the Muslim Arab military commander who led the 7th century Muslim conquest of Syria that ended Byzantine rule in the country. Consecrated in 1908, the mosque is notable for its traditional Ottoman-Turkish architectural style.

In 2013, Assad’s forces shelled the historic mosque, ultimately destroying its mausoleum [44]. The mosque has witnessed regular attacks ever since.