Holy Trinity Cathedral in Addis Ababa was built after 1941 to commemorate the liberation of Ethiopia from Fascist Italy. Photo by David Stanley via Flickr. CC BY 2.0

At the end of June, the Ethiopian Council of Ministers revealed a bill [2]that seeks to address questions of social services, language, education and culture involving the country’s capital, Addis Ababa, and Oromia, Ethiopia’s largest region within which Addis Ababa is located.

The government and its supporters say the law is needed to redress the historical injustices that the people of Oromia suffered since the establishment of Addis Ababa. Critics see the law as a tactic to disenfranchise the residents of Addis Ababa. Some go further in their allegation that the law is intended to worsen the already sensitive ethnic relations in Ethiopia.

Most of the debate about the bill has fallen along the lines of regional elites against more cosmopolitan elites, tradition against modernity, and ethno-nationalists against civic nationalists — divisions that are often a source of strife in Ethiopia.

On the map of Ethiopia, Addis Ababa is a stretch of high plains inside the state Oromia. With just 0.047 percent of the country’s territory, Addis Ababa is the largest metropolitan area in Ethiopia. Numerous ethnic and religious groups from every corner of Ethiopia live in Addis Ababa; a significant number of Addis Ababa’s 4 million residents generally present themselves as cosmopolitan, liberal and post-ethnic.

Oromia, meanwhile, is home to the Oromo people, the single largest ethnic group comprising at least 34 percent of Ethiopia’s 100 million population, but which has also historically been politically marginalized. Addis Ababa is the seat of the current government —  EPRDF, which is dominated by the Tigrayan People’s Liberation Front — and although it is inside the state, Oromia does not control the city; the federal government does and has since 1991 when Ethiopia was transformed into a federation of nine ethnic-based regional states.

The Ethiopian constitution, however, accorded Oromia what the government called “Special Interest” over Addis Ababa when it was adopted in 1995 due to the city’s unique location.

The purpose of the new draft law [3]is to legislate the “Special Interest” provisions of the constitution and solve other problems that have arisen between Addis Ababa and Oromia, such as the possible expansion of the city’s boundaries, which would have meant the eviction of Oromo farmers whose subsistence depends on farmlands that are located around the city.

The expansion, among other things, was at the heart of protests mounted by Oromo students from 2014 to 2016. The Ethiopian government cracked down on the movement hard; according to rights organizations, hundreds were killed and thousands [4]were arrested before Ethiopian government declared a state of emergency in October 2016.

The proposed law is contentious, but many expect that it will be passed over the next few days. 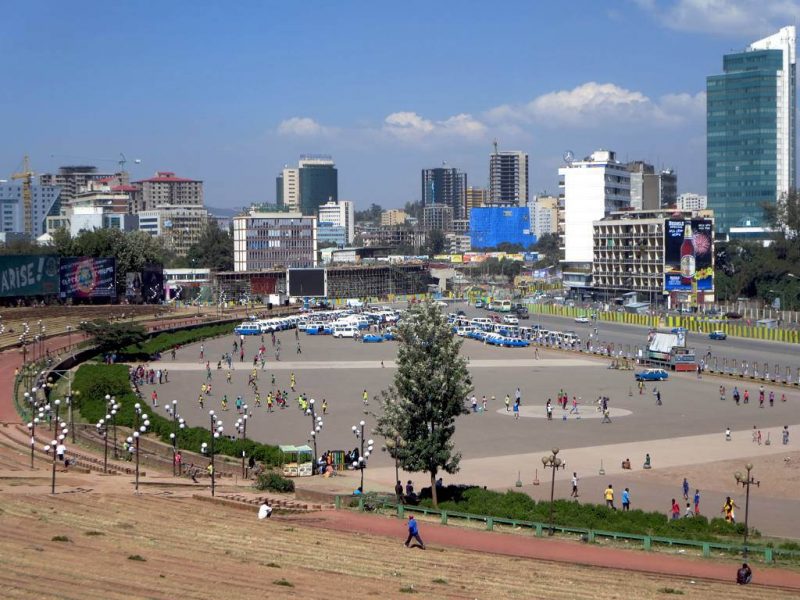 Addis Ababa’s skyline provides a backdrop for Meskal Square, site of military parades and rallies during the Communist era which ended in 1991. Photo by David Stanley via Flickr. CC BY 2.0

There are about 13 “titles” in the bill, each dedicated to the “Special Interest” of the state of Oromia over Addis Ababa.

In its major provisions, the bill would incorporate Oromo (known as “Afaan Oromo”) as a working language of the municipality, mandate that the city government provide education for residents of Addis Ababa whose mother tongue is Afaan Oromo, and preserve Oromo cultural enclaves and buildings within the city. The bill also sanctions the use of Finfine (in Oromo language) as an alternative name of Addis Ababa and allows the renaming of streets, public squares, and neighborhoods in Addis Ababa with names memorializing Oromo culture and identity.

This part of the bill has been discussed widely on social media as it deals with the history, identity and language use of Addis Ababa.

Opponents fear it causes division and strife by appealing Oromo nationalists, and some have further claimed the problems these provisions claim to solve don’t actually exist.

However, many Oromo nationalists support this part of the bill, albeit with qualms.

Oromo nationalists, however, categorically oppose a different part of the bill that deals with the ownership of land in Addis Ababa.

In the current practice, the federal government owns the land and the bill explicitly asserts that Addis Ababa is a federal land. But the bill would warrant the state of Oromia to acquire and develop land for government activities and public services free of occupancy payment.

For critics, that doesn’t do enough to grant Oromia its rightful and historical ownership of the city of Addis Ababa. As a guest author of the pro-government news analysis site the HornAffairs wrote [6]:

The constitution clearly provides that territorially the Ethiopian State is structured into only nine regional states. The territory of Ethiopia comprises the territory of these member states.

Apart from the member states territory there is no piece of land belonging to the federal government or any other kind of administration. Any conception of Addis Ababa as an administration with its own separate territorial jurisdiction outside of Oromia or as a federal territory is ruled out from the beginning.

Anyone living in Addis is living in Oromia Regional State.

Non-Oromo opponents of the bill claim that this section will allow discrimination against Addis Ababa residents, who usually present themselves as post-ethnic and cosmopolitan.On Facebook, the former chairman of Addis Ababa Chamber of Commerce,Kebour Ghenna, wrote: [7]

Last week’s EPRDF arbitrary edict, offering Addis Ababa an absurd affirmative action model has come as a surprise and shock to me… I am sure to many others too. This decree reinforces further the attempt of the government to divide of Addis Ababians according to ethnic lines, and disenfranchises a huge number of residents.

But Oromo nationalists argue back that they were forcefully removed from the land over the course of numerous bloody disputes, so it makes sense for Oromia to be guaranteed some level of influence over the city. In his response to Kebour Ghenna, Birhanemeskel Abebe wrote [8]:

No Armageddon! No Apocalypse at the return of Addis Ababa’s as an Oromia City and Capital!

Another important component of the bill deals with jobs, social and health care services.

Under current practice, all Ethiopians including Oromos in Addis Ababa are entitled to jobs, social and health care services. But the bill would institute opportunity structures for Oromo youth who live in and around the city of Addis Ababa, seeming to imply that there is discrimination against Oromos in Addis Ababa. Opride, a news analysis site wrote [9]:

…the draft further alienates and excludes the Oromo people from the city by misconstruing basic constitutional and human rights as Oromia’s special interest. For example, a key provision on health care states that Oromos living in towns and rural areas around Addis Ababa can “access health care services at government hospitals and medical facilities like any resident of the city.” This is laughable. It implies that there is a law in place that currently prevents Oromos from seeking medical treatment at public hospitals and clinics in Addis Ababa. Or that Addis Ababa residents currently enjoy preferential access and treatment at public health institutions in the city.