A version of this post appeared on Mtega.com [1], Ben Taylor’s personal blog. The piece is republished here with permission.

On June 14, John Magufuli, the president of Tanzania, met with John Thornton, the chairman of Barrick Gold—the world’s largest gold mining company—who had flown in from North America for the purpose. Reports of the meeting dominated the headlines in Tanzania for the next several days.

The subject of the meeting was the “mineral concentrates” produced by Barrick subsidiary Acacia Mining plc at its three gold mines in Tanzania. On March 5, 2017, a large number of containers containing concentrates were seized for investigation [2], and exports suspended. The committees appointed by the president to carry out these investigations accused Acacia Mining of massively understating the amount of gold and other minerals present in the exported concentrates, thus depriving Tanzania of a huge amount of revenue—to the tune of three years’ worth of the national budget.

Acacia and Barrick were alarmed, and disputed the committees’ findings, insisting [3] their exports have always been audited and declared accurately, and that all payments of tax and royalties, etc. to the Tanzanian government had been made. For a few weeks [4], Acacia had been calling for dialogue with the Tanzanian government so the issue could be resolved. (This post on Bloomberg [5] offers a comprehensive account of the matter).

After the Magufuli-Thornton meeting, the president’s office released a video [6], shot on the steps of State House, in which the two men give their versions of what transpired during the meeting. To spare you the trouble of watching, here’s a summary: the president thanks Thornton for coming, and for agreeing to pay what is due. Thornton says his company was pleased to be able to enter into a dialogue to resolve the ongoing dispute, and would be happy to pay the rightful amount that was due.

An accompanying statement [7] by State House made similar claims, saying that Barrick had agreed to pay what the government has said its owed to them.

The president said, on top of agreeing to pay what they owe us, Prof. John L. Thornton has agreed to work with Tanzania to build a smelter in the country.

Based on Barrick’s comments, the meeting seems to have concluded with an agreement to have further discussions, nothing more, nothing less. There was no consensus reached on the amount of money—if any—owed by Acacia/Barrick to the government of Tanzania, nor any admission of liability on the company’s part. The government’s own official press release [8] on the meeting supports this conclusion, as do Thornton’s comments after the meeting and the latest press release [9] on the Acacia website and the market update call [10] they held on the morning of June 15.

The next day following the meeting, however, six Swahili papers portrayed the meeting as a big win for the president and for Tanzania, going well beyond even what the president himself said about the meeting. Some stated that Acacia/Barrick agreed to pay what is being demanded of them, or that they have admitted responsibility for wrongdoing, neither of which is reflected in the actual agreement reached. 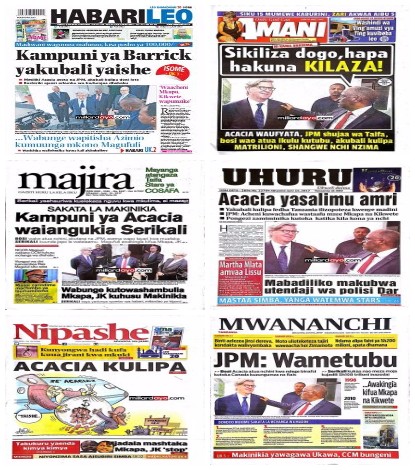 From top left: Habari Leo, “Barrick agrees to end the matter”. Imani, “Listen young man, there is no weakness here”. Majira, “Acacia bows down to the government”. Uhuru, “Acacia heeds the order”. Nipashe, “Acacia to pay”. Mwananchi, “JPM: They repented”.

Two other Swahili papers took a different line, focusing instead on an issue mentioned in the second part of President Magufuli’s post-meeting remarks, in which he condemned the media’s attacks on former Presidents Benjamin Mkapa and Jakaya Kikwete accusing them of alleged lax oversight of the mining sector.

“I have read both reports and there nowhere is it mentioned that Mr. Mkapa and Mr. Kikwete are implicated. Media outlets should stop tarnishing the names of these men, who did a great job of serving their country, they should be allowed to rest in their retirement,” President Magufuli said.

The weekly tabloid Mawio, which did not heed Magufuli’s call, was subsequently suspended [11] for two years by the government for linking the two former presidents to the scandal. 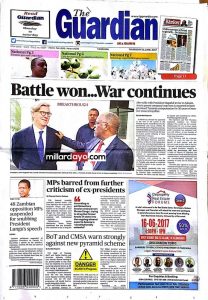 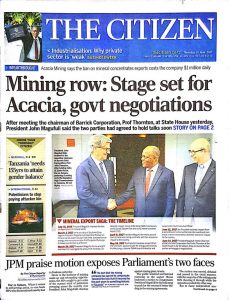 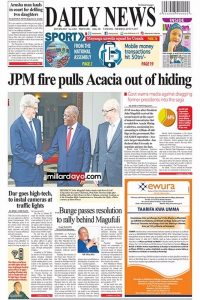 Three English-language papers took a more measured tone, but it’s still hard to agree with the sentiment expressed in The Guardian and Daily News headlines. Was the “Battle won”? Were Acacia “hiding”? The Citizen’s headline came closest to expressing the reality of what happened, as did their coverage in general, notably a balanced and sensible editorial [15], which stated that:

Now that the ground has been set for negotiations, our prayer is that both the parties will engage in earnest talks based on good intentions for mutual benefit. […]

[I]t is in the interest of both parties to find a middle ground and secure a win-win situation, for we wouldn’t like to see this standoff degenerate into a fully-blown crisis with devastating consequences.

The situation was also misread by several cartoonists. Nipashe and Mtanzania were off the mark, Mwananchi managed to sidestep the main point, and Daily News used aggressive imagery. The Citizen’s cartoonist did better, but Gado, who did not publish his cartoon in any of the papers, went in a completely different direction from everyone else. 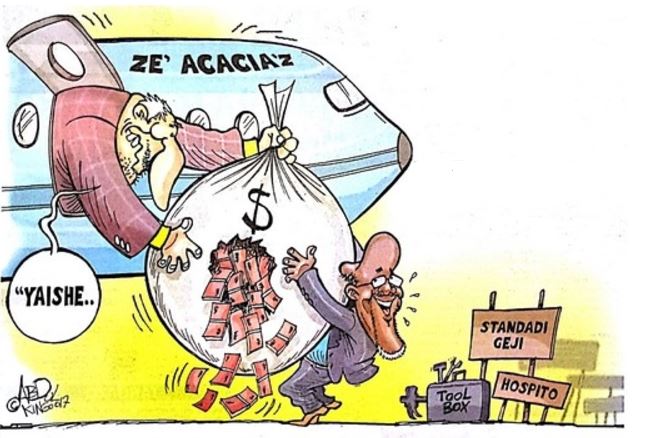 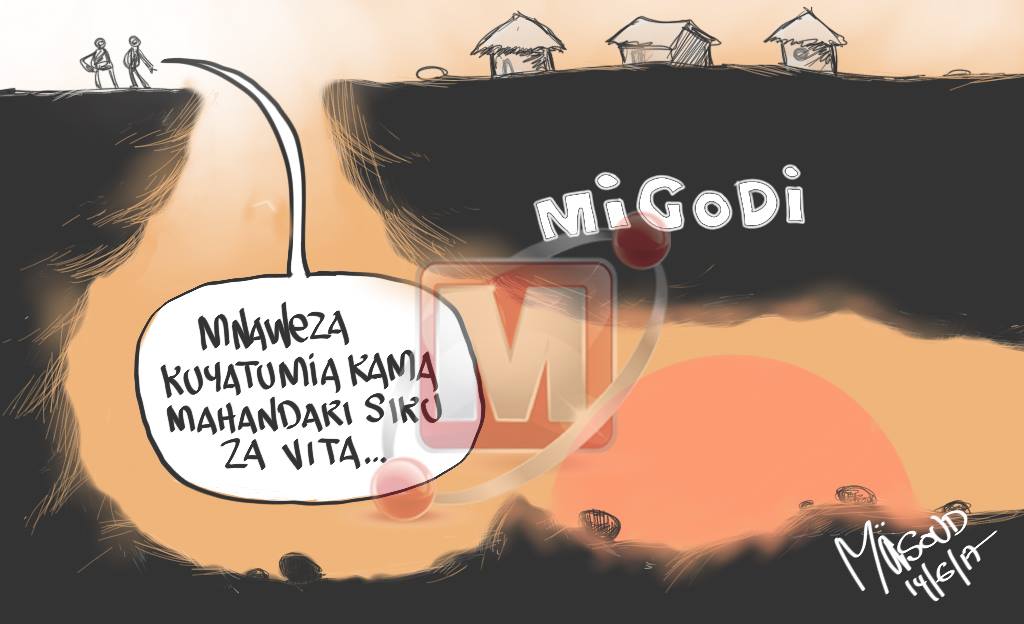 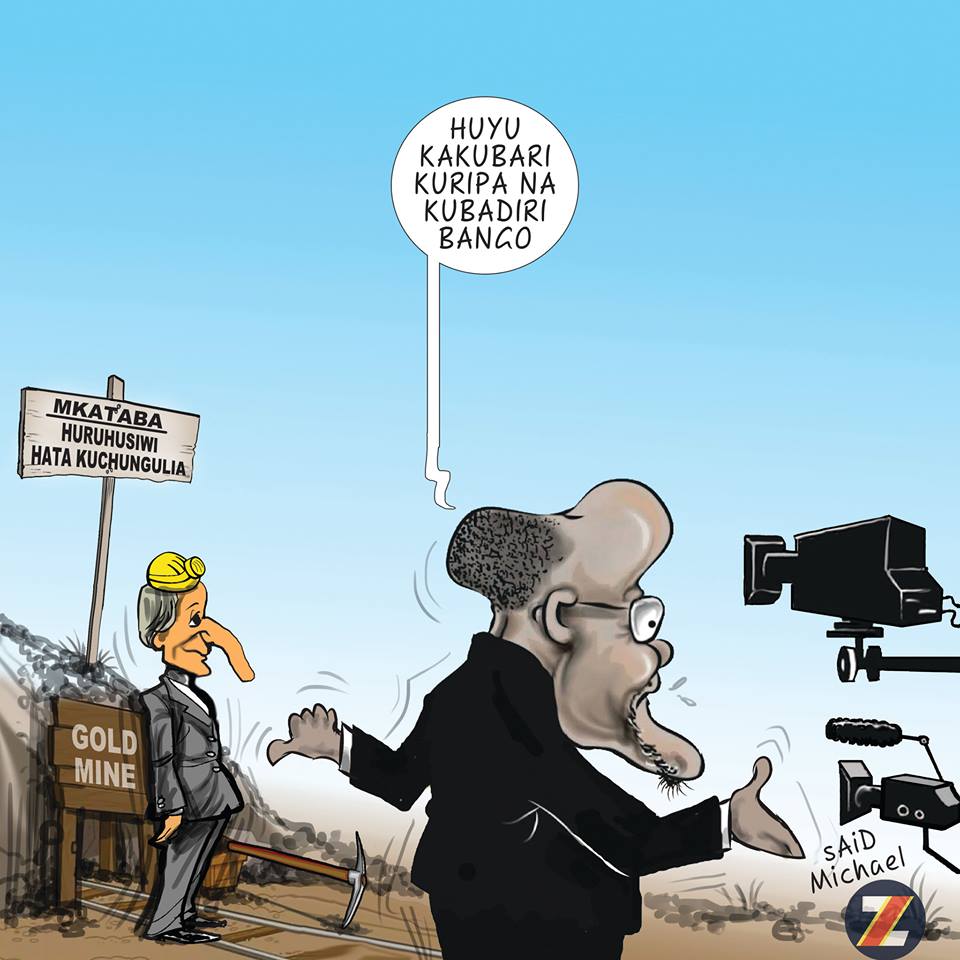 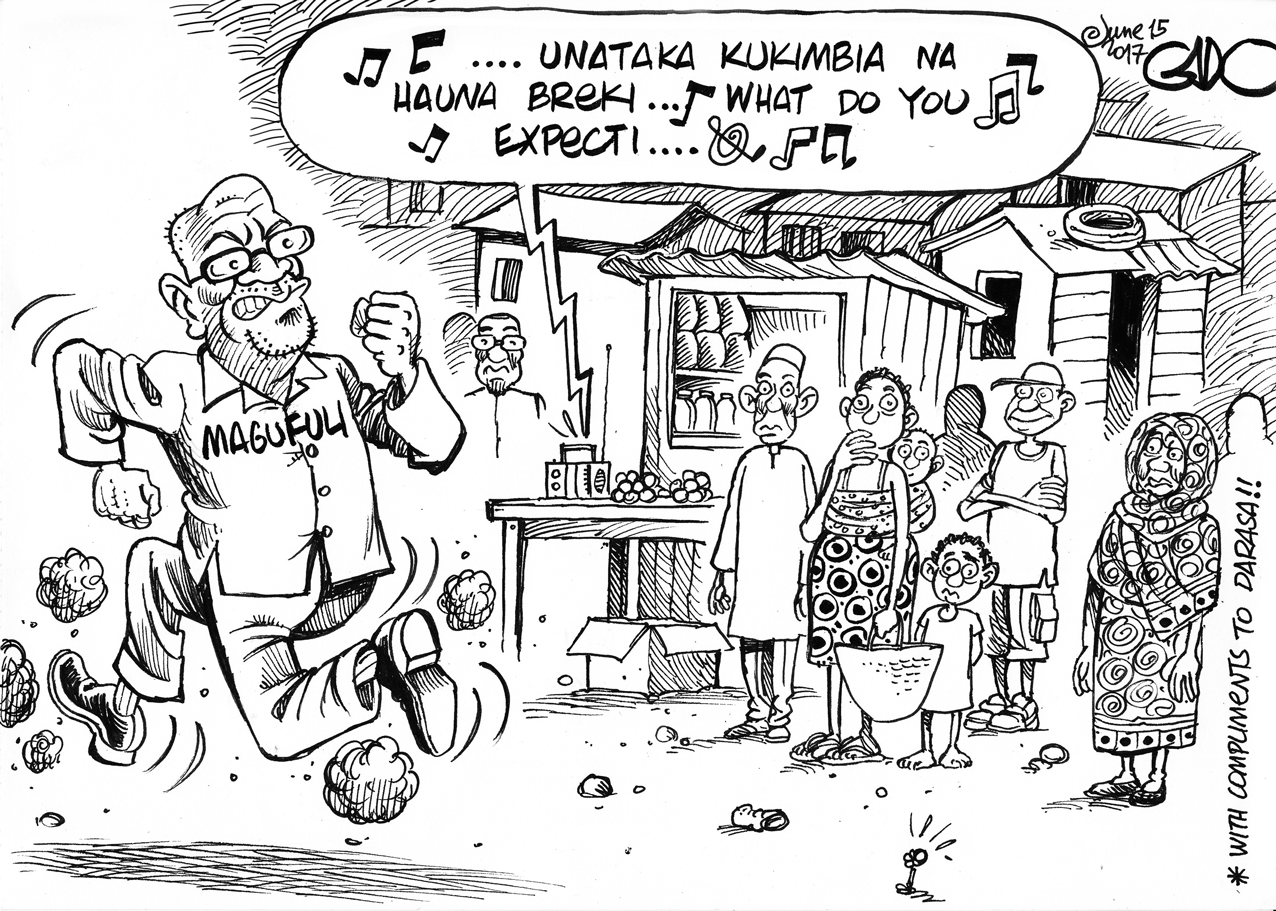 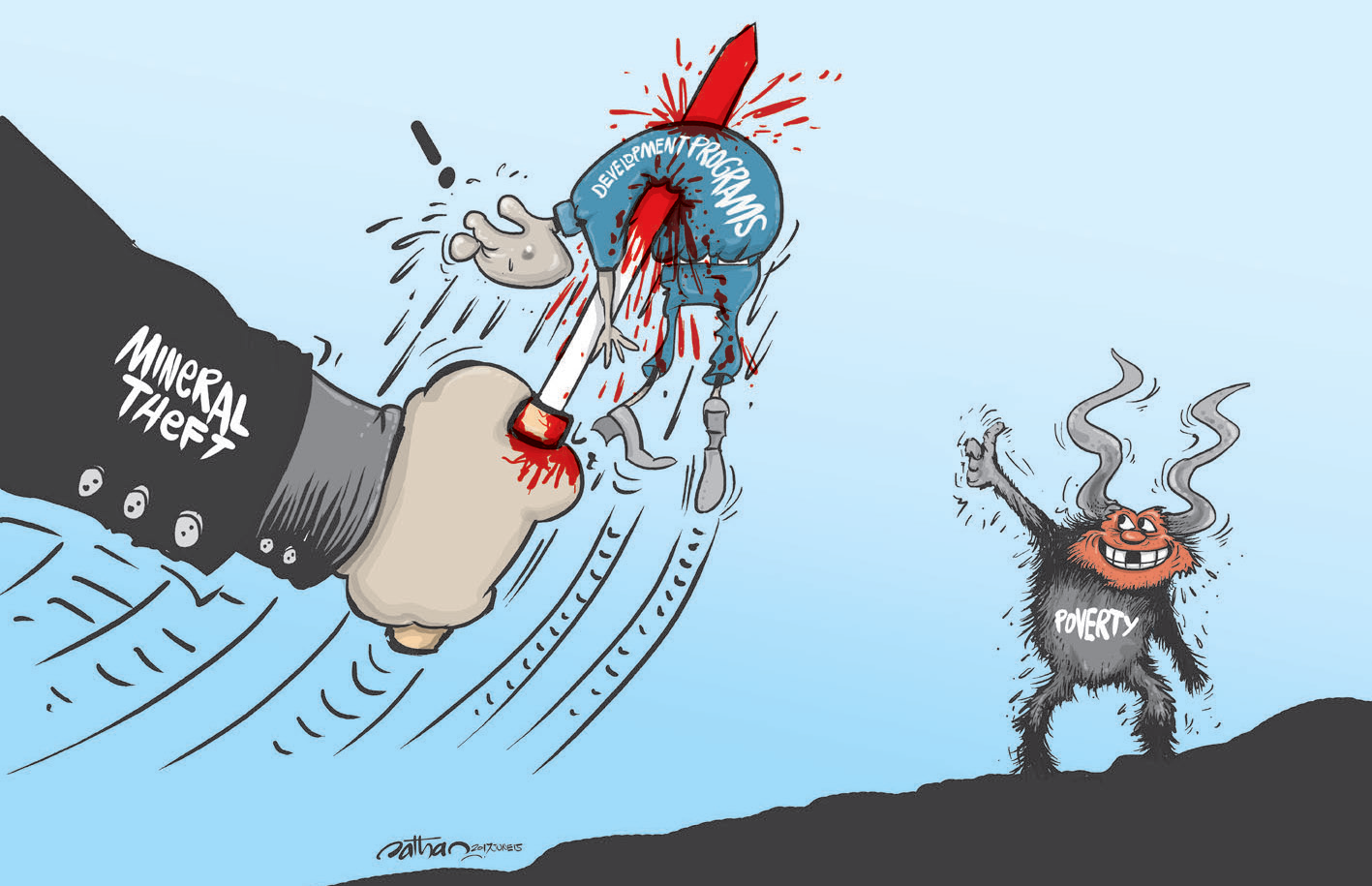 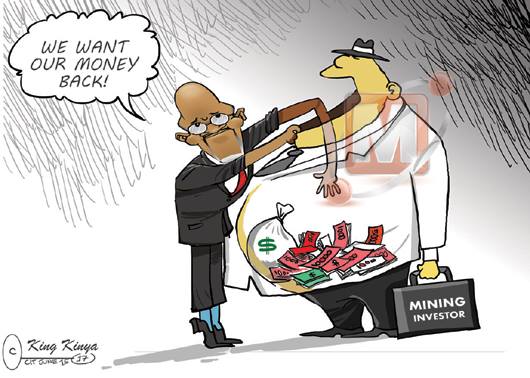 The varying interpretations of the outcome of the meeting between Magufuli and Thornton by the Tanzanian media raises the question of whether these journalists and editors are aware they were potentially misleading the public; and if they did know, why were they doing so? Could it have anything to do with the law that allows the government to suspend Mawio so easily? Could they be worried that what happened to Mawio could happen to others as well?